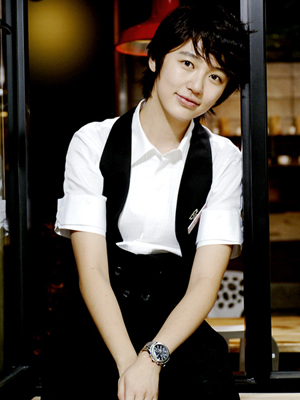 Coffee Prince’s Flagship Store is a TV series that revolves around the love life and dreams of four young people who meet together at a cafe.
Han-gyeol (actor Gong Yoo) is a smart young man who hates to be tied down to one career in his life. Abhorring the idea of joining the family business, he is ordered by his grandmother to manage a cafe. Unable to disobey his grandmother, he reluctantly takes over the responsibility of running a cafe and begins to immerse himself in the gourmet coffee business. One day, he meets Eun-chan, a cheerful girl who has an unpredictable personality, and learns the meaning of true love...
< Coffee Prince’s Flagship Store> is a story about a group of young people who find themselves drawn to the gourmet coffee business where they also find love and new hope. The TV series will also show what it takes to run a family business and become a true steward who can oversee a company.

A cafe with a view.
In the dreary city with towers of concrete structures everywhere… The dynamism of the younger generation brings energy to the lifeless city...
When you commute on a bus through the city, you’ll find yourself looking with pity at the people walking by skyscrapers. But it’s people like those you see in the streets who build these tall buildings and work hard inside the offices to create new hope and dreams for themselves and other people. The city can be an unfriendly place. Then what brings energy and warmth to the city? It’s the hard work of people who have lofty dreams and hopes for a more fulfilling life. Like an embroidery piece that requires many hours of cross-stitching threads with a small, thin needle, the people in the city are the fabric of society. We live winding lives that are not ordinary inasmuch as they are precious to our very existence. And this coming-of-age story about four young people will fill your heart with a new hope.
“There is a special aroma from coffee beans that will move your heart.”
It was in 1896, when King Kojong was served coffee at the Russian Embassy for the first time by a woman named Sontak, who was the sister-in-law of Russian Ambassador Veber. This was the first time and place where coffee was introduced to a Korean. In the 1920s, Japanese cafes, which were called Kikdajeom (喫茶店) began appearing in Seoul. The first cafe that was opened by a Korean was called Kakadyoo and it was owned by film director Lee Gyeon-seok. At the time, there were three Kikdajeom stores that were popular in Seoul. The cafes that opened after that became popular hotspots among novelists, actors, and musicians.
So cafes became a natural gathering place among people Some people avoided drinking coffee because they believed it was unhealthy but even among non-coffee lovers, they would probably all agree that coffee has a deep, rich aroma. Most people probably stopped once in their lives to smell the aroma of coffee from a cafe.
The smell of coffee will greet you in the morning. At work, co-workers will offer each other a cup of coffee.
Couples drink coffee on their first dates as they get to know each other better. People have coffee after a long day with their loved ones. Coffee is a drink that is ubiquitous in our lives. It brings people together.
A cup of coffee is a time for people to enjoy a short break from their busy lives …
“Relentlessly fine-tuning your core competence.”
A cook who can make a dumpling in 3 seconds. A candlemaker who can make holes in 120 candles in seconds. A newspaper delivery man who carries a load of newspapers weighing 300 kilograms on his back. Have you ever seen these remarkable people? These people became skilled at what they do because they focused on what they were good at and practiced it over and over. They sweated over jobs that other people overlooked and became skilled workers. It’s time to reflect on what is truly important in building a successful business instead of focusing on the bottom line,