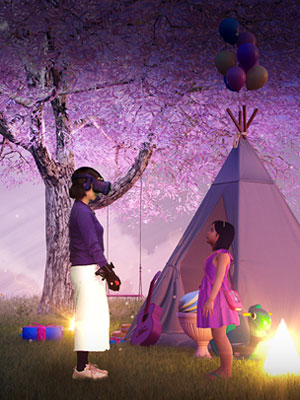 ▣ Synopsis
What is your most heartwarming memory?If you could meet a deceased family member, what would you say to him?With this question in mind, the staff started a project of bringing a human documentary and virtual reality together. Will virtual reality, artificial intelligence and immersive content go beyond creating entertainment like games and be able to move a person’s heart? The plan is to incarnate the person someone misses the most and bring back his warmest memories. They also test the possibility of using technology to touch a person deep within.


Season 1. Meeting Na-yeon (60min x 2eps)
Jang Ji-sung, who was a mother of four, lost her third child Na-yeon three years ago in the fall after she turned seven. When Na-yeon had swollen tonsils and a fever, Ji-sung thought it was a cold, but after a month, they learned it was a rare disease called hemophagocytic lymphohistiocytosis.
Ji-sung’s one wish is to make Na-yeon her favorite seaweed soup and tell her she loves her very much, that she has never forgotten about her, if she could meet her one more time. There are photos of Na-yeon all over the house and Ji-sung takes toys Na-yeon used to like to the charnel house she visits every month. She even tattooed Na-yeon’s name and birth date on her body as a promise to remember her forever. Worried that Na-yeon’s existence in this world would fade away if she doesn’t try to remember her, Ji-sung wants to do everything she can to hold on to her memories. We started this project with the earnest hopes of a family, using a new way to reminisce.


Season 2. Romance (60min x 2eps)
The chaotic life of a father of several daughters
Kim Jung-soo is a widower. He loved his wife passionately and they had a happy marriage. He finds no reason to live after losing his wife. He is at a loss as to how he will raise his five children without his wife, especially as his daughters reach their adolescence. This depicts the struggles of a father of four girls and how he overcomes them one by one.

A special message from a mother, who loved her children very much
The only memory the third(currently 13), fourth(currently 11) and fifth(currently 9) children have of their mother is her sick and lying in bed. Even when they’re happily playing, their faces turn dark at the mention of their mother. It’s because they only remember her as someone who was always sick. This is a display of the mother’s affection and true feelings through a journey of finding out how much their mother loved them, as well as a chance to restore a healthy image of their mother to give them a magical experience that will help heal their scars.

Sung Ji-hye was not only the mother of five children, but a wife whom Kim Jung-soo felt a special kind of love for. We restore the innocent and sincere love of the husband and display a beautiful story of a family overcoming the absence of the mother.

Season 2. Meeting Yong-gyun (60min x 1eps)
Kim Yong Gyun, a 24-year-old laborer, dies on December 10, 2018 when he gets stuck between a conveyer belt and roller while inspecting the facility at Taean Thermoelectric Power Plant.The facility was dark and the rule of working in pairs had not been enforced.After her son dies, Yong Gyun’s mother Kim Mi-sook participates in various gatherings for temporary employees. She wants to reveal the fact that her son had not died due to his carelessness, but was an issue of organization, and make sure it never happens again. Will we be able to save Yong Gyun, the son who was always affectionate toward his mother?