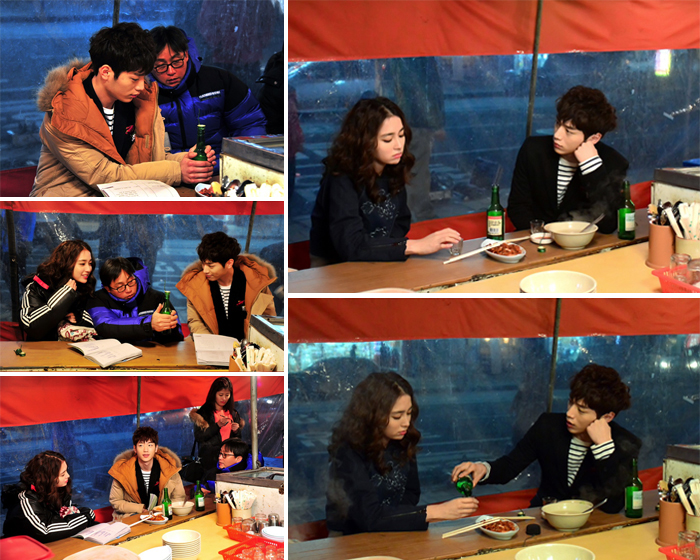 MBC’s new Wed&Thu drama series [CUNNING SINGLE LADY] aired a sweet dating scene of Lee Min-jeong and Seo Kang-joon. Although he is younger than her, they entered the company on a same day and this is how their relationship started.

In the third episode, in order to avenge her ex-husband(Joo Sang-wook) who yelled at her to ’take a hike’, she entered his company, ‘D&T Softventures’ as an intern. Seo Kang-joon is in fact the son of the CEO but he is forced by his father to work as an intern in his company. Thus Lee Min-jeong and Seo Kang-joon entered D&T Softventures at the same time and he is interested in her from the first sight.

Lee Min-jeong ambitiously started her first day but she soon fell into trouble as her lost identity card caused a security accident. She was accused to be the suspect of the accident. That night, Seo Kang-joon found her drinking alone in a cart bar and joined her. In order to cheer her up, he even performed a magic.

Before the shooting, while actor Seo Kang-joon was learning the magic, both Lee Min-jeong and Seo Kang-joon were amazed at it. This night at the cart bar is a very important scene of the drama plot because it will bring them closer heartedly. Director Goh Dong-sun produced a sensitive acting scene where their hands touch while absorbed in magic performance.

While shooting the ‘hands touching’ scene, actor Seo Kang-joon expressed embarrassment by bursting into laughter. Actress Lee Min-jeong advised him by saying, “you should be very thoughtful at this kind of touch because it actually touches the hearts of the girls.”