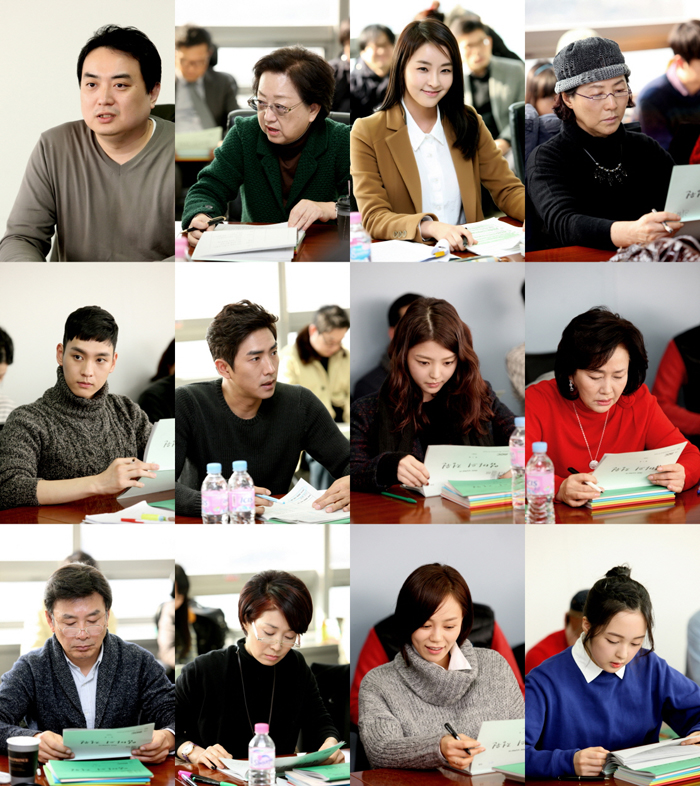 MBC’s new daily drama series [Mother’s Garden] cranked in with the script reading where all cast and staff gathered.

Before the reading started, director Noh Doh-chul and script writer Park Jung-ran introduced cast and staff to each other helping them to greet each other. Director Noh said, “I feel very honored to start a long six months journey with the best cast and the best writer. I will try to bring about the best teamwork so that everyone could laugh and smile while working for [Mother’s Garden].”

Script writer Park Jung-ran monitored every actor’s and actress’s acting and closely explained the characters. Especially the young actors and actresses were inspired by her explanation becoming stable with their acting.

Main actress Jung Yu-mi acted her character ‘Yoon-joo’ expressing her charm with her typical cheerfulness. She again showed a perfect act when she was expressing the shock and confusion which earned much compliment from the elderly actors and actresses.

Go Doo-shim, the representative elderly actress is again acting ‘mother’ in this drama and she embraced the whole place just like a mom. Actress Jang Jung-hee acted the best friend of ‘mother’ often bringing the laughter to the location.

[Mother’s Garden] is a drama to show the preciousness of love. It shows how ‘love’ is reborn as a jewel through the painful process. This drama will bring the comfort to the viewers who need a warm shelter like a ‘mother’s garden’.

[Mother’s Garden] is written by script writer Park Jung-ran who has written [A Thousand Kisses], [Don’t Cry My Love] and directed by Noh Doh-chul who has directed [Twinkle Twinkle], [Soul Mate].