Here are the key points to fully enjoy MBC’s new drama series [Golden Rainbow], the seven colored drama for the healing of the heart. 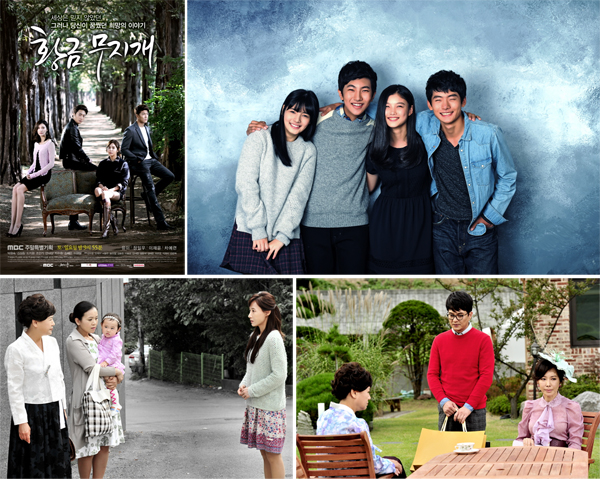 
[Golden Rainbow] is a story about seven youth who are brought together under one roof by the fate. The drama is already in talks because the script writer is Sohn Young-mok who has made a big hit with MBC’s [May Queen] and the director is Kang Dae-sun who has directed ever so popular [My Princess] and [I Do I Do], also broadcasted on MBC.

Here are the key points to fully enjoy [Golden Rainbow].


▶ Flawless acting of the children actors and actresses

The beginning episodes of [Golden Rainbow] is of talented children stars including Kim Yoo-jung. Kim Yoo-jung has overwhelmed the drama viewers with her outstanding acting in [May Queen] and here she goes again! Director Kang Dae-sun said “while working with the children stars, I felt my heart being healed with their innocence. I hope I could share this feeling with the viewers.”

For the grown-up episodes, it is ‘all star cast’ full of outstanding stars. Including actor Kim Sang-joong who is coming back to MBC drama after 16 years, Park Won-sook, Cho Min-ki, Doh Ji-won, Anh Nae-sang, Ji Soo-won... all the professional actors and actresses shine with their existence in the drama. Park Won-sook has recently made a big hit with her acting ‘a cruel mother-in-law’ in [A 100 Year Legacy]. Cho Min-ki and Doh Ji-won recently had a hard time acting under the sprinkler truck but their acting was very stable and rigid under the fake storm which made all the staff applaud.

MBC has been making legendary popularity for the weekend drama series slot with [May Queen], [A 100 Year Legacy], [Scandal: a Shocking and Wrongful Incident] and [Golden Rainbow] is expected to lead on this legendary success. [Golden Rainbow] is another drama where [May Queen]’s staff are gathered again: script writer Sohn Young-mok, actor Anh Nae-sang and child actress Kim Yoo-jung. Also, Actor Kim Sang-joong said that he is more than satisfaction with his own character made up by script writer Sohn Young-mok. Another masterpiece of MBC weekend drama is expected to be born.