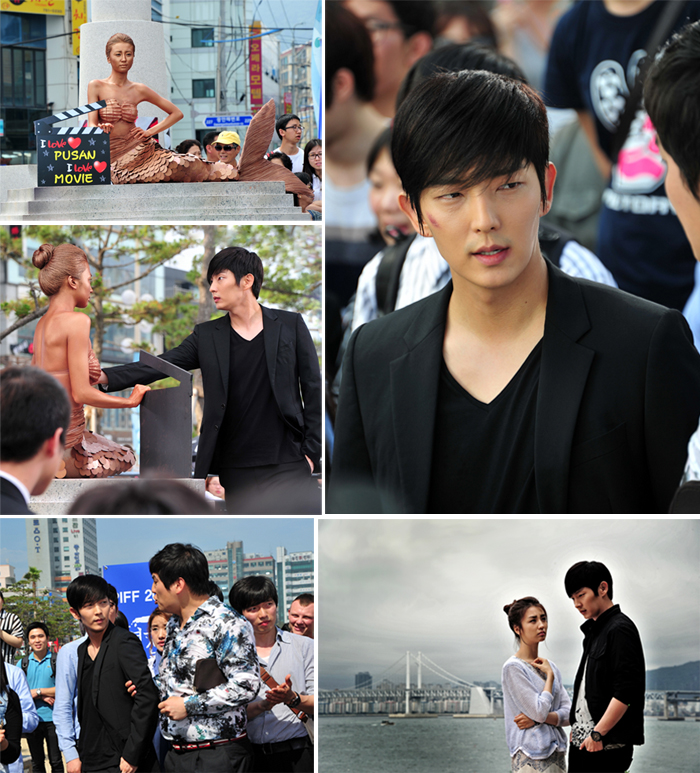 - Lee Joon-gi, how he tells the difference between a real woman and a statue.
- Park Ha-sun, how she could break into a smile even after acting an immobile statue of a mermaid for 10 hours.
- [Two Weeks] production team, how they enjoyed the festival with Busan citizens.

Two main characters, Jang Tae-san(acted by Lee Joon-gi) and Seo In-hae(acted by Park Ha-sun), met for the first time in Busan on June 20th. The episode they shoot on this day was about the giddy first meeting of the couple 8 years ago.

On the day of the shooting, Park Ha-sun turned into a golden mermaid statue and sat shining on the beach. Park Ha-sun was acting Seo In-hae, the student dancer who was doing a performance to promote “Busan International Film Festival’,

In front of her, other dancers’performance heated up the festival. To see these two stars, Busan citizens gathered to the beach. They enjoyed the shooting location as if it was the real film festival going on.

Jang Tae-san(acted by Lee Joon-gi) appeared loudly among the Busan citizens. He was arguing with his friends whether the mermaid statue was a real woman or not. In order to find out, Jang Tae-san stood in front of the statue. And he put all the citizens and Seo In-hae into a shock by putting his hand on her chest.

The moment the director signed “OK”, Lee Joon-gi ran away from Park Ha-sun which made spectators laugh. Park Ha-sun, wearing specially produced costume and body-painting, had to sit in one immobile posture from dawn to evening. However she never lost a joyful smile to her fans who gathered to see her.

Even though the shooting took a long period of time, Busan citizens did not leave the place until all the shooting was completed. Lee Joon-gi kept saying ‘thank you’to the spectators and Park Ha-sun kept waving her hands greeting the crowd of the fans.

New coming up Wed-Thu drama series [Two Weeks] is the story of a man who has been living a meaningless life. But one day he is wrongfully accused of a murder and while running away, he finds out that he in fact has a daughter who is dying of blood cancer. Now he has to struggle for two weeks in order to save his daughter.

[Two Weeks] is written by Soh Hyun-kyung who wrote [My Daughter Seo-young[(2012), [Great Expectation](2009) and directed by Sohn Hyung-seok who directed [Personal Taste](2010), [Be Strong Geum-soon](2009). And their encounter draws a big attention to the drama lovers.

[Two Weeks] will be broadcasting from August following after [Queen’s Classroom].