Rating starts with 14.6%, the highest of the dramas on equal time 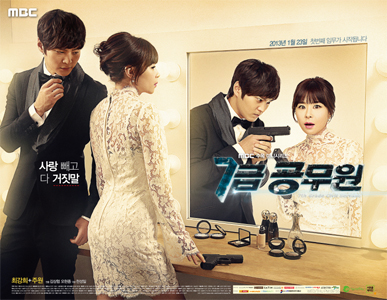 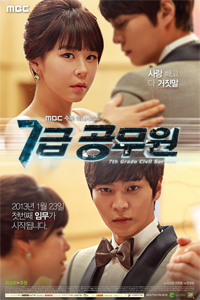 MBC’s new drama series [Level 7 Civil Servant]’s first episode aired on Jan 23, 2013 recorded the rating as high as 14.6% which was the highest among the programs aired at the simultaneous hour. The dramas of this time of the day are very competitive but [Level 7 Civil Servant] kicked out with a very good start. The actors and actresses have shown the authentic romantic action comedy.

The first episode was about the first encounter of the main couple: CHOI Kang-hee & JOO Won. Kang-hee is the albeit girl who is desperate for a job for the living and JOO Won is a juvenile boy who dreams to be a civil servant. Their first encounter, which started as a blind date is painted with a fake and lies. JOO Won takes Kang-hee on a car drive where his new car ended up in a crash and Kang-hee curses him feeling threatened that she almost died in a car accident. They turn the backs to each other in hatred.

As soon as the first episode ended, the viewers applauded on MBC’s Drama bulletin board by leaving the notes such as : “JOO won is covering the unfocused character with his typical cuteness”, “the dialogues are so enthusiastic I just could not stop laughing the whole hour”, “far better than I expected. Not only the main characters but the supporting actors and actresses like ANH Nae-sang, JANG Young-nam and others were great, too. This will be another well-made drama” ...etc...

On the second episode which will air on the night of Jan 24, Kang-hee and JOO Won will re-encounter on a bus going to the Training Institution for The National Intelligence Service. But on the bus they start a quarrel and are kicked out of it. Knowing that they will be deprived of the chance to work in The National Intelligence Service if they do not arrive to the training institution on time, each tries to manage to get there by his and her own means. But their brawl does not stop along the way.

[Level 7 Civil Servant] is a romantic comedy of a trouble-making couple working in the National Intelligence Service. It airs on MBC every Wed & Thu 21:55-.