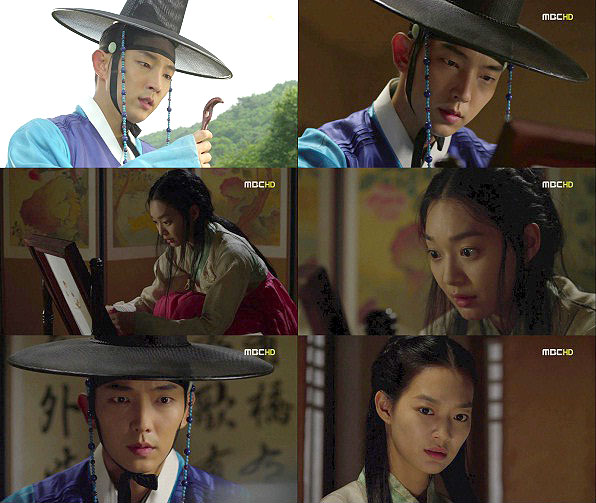 Arang’s life before her death, true identity of Joo-wal, disappearance of Eun-oh’s mother... fervent viewers are capturing every little scene and every little material in the scenes to solve out the mysteries of the drama <Tale of Arang>.

<Tale of Arang> is attracting the viewers with new style of telling the story of an accustomed old fairy tale, speedy plot, high quality production, and skillful acting. The drama was fervently responded from the very first episode. And as early as in the second episode, it was revealed that Arang’s life time name  was ‘Lee Seo-rim’ and the mystery became more tensed from the third episode.

The drama is still in the beginning and there are many mysteries to solve leaving the viewers ever so fervent with limitless curiosity. Below are the different types of fervent viewers of <Tale of Arang>.

Here are what this type of viewers say :
“<Tale of Arang> gets more interesting as you watch again and again. You should not miss the hidden meanings of every scenes and lines. There always seems to something hidden under them.”
“The reason Arang’s heart beat when confronting Joo-wal was not because she felt love, it was the fear she felt. Arang says her side hurts and this might mean that she was murdered. There’s a possibility that Joo-wal might be the killer.”
“I don’t think it was only fear Arang felt when she met Joo-wal. Joo-wal is said to be a character hiding a ‘love scar’... I think this might mean Arang.”
“I have watched episode 2 again and thought, since Moo-young is such a sensitive character, he might not have missed Arang. I think everything was all planned by the Jade Emperor, the Death Angel.”
“Seeing that Arang keeps the hair pin which had belonged to Eun-oh’s mother, I think Eun-oh’s mother is somewhat related to Arang’s death.”
The viewers are watching each episode again and again and they discuss about it on the bulletin board of MBC’s drama web sight. They are discussing very actively on the relationship of Arang and Joo-wal.

Type 2 : Eyes Like Eagles – futuristic, speculating the previews
This type of viewers predict the story of the up coming episodes, reviewing the short preview clips again and again in search for the new secrets and predict the plot ahead. The preview clips are as short as 30 seconds, but they find and suspect a lot from these preview clips.

Here are what this type of viewers say :
“In this preview, I saw Arang dressed up like a male and meet Joo-wal. At that scene, Joo-wal’s ring was shining... I think it is related to Arang’s mysterious hair pin.”
“Joo-wal looked at Arang and grabbed her arm. I think this means that Joo-wal also has a special mystic power.”
“Through the preview, it is known that Arang has been dead for three years. There must be some secret that her body is not rotten. Or is it because she has a regret?”
This group does not miss one single clue from the short previews. They are detecting how the story will be leaded with their eagle eyes.

Type 3 : Analysts – They analyze the whole story
This type of viewers analyse the whole story after completion of each episode. And through the analyzation, they predict the ending of the drama. They do not focus on the small facts, but they look at the broader aspect of the whole story.

Here are what this type of viewers say :
“The whole story is about searching for the truth. I am expecting a big surprise ending for the last episode. I am also expecting an elaborated story on the special relationship of a couple, and on the fantasy of a destined encounter.”
“The story bears tragedy because it is mainly about the relationship of a ghost and a man who can see a ghost. Eun-oh will be sad and Arang will be desperate toward the end of the story. I see that there are groups of passionate viewers who are already getting ready for the tears of the couple’s tragic ending.”
“It is too early to decide that Arang and Eun-oh’s relationship might end up tragically. It might be difficult to keep this relationship but I expect a happy ending.”
As such, the viewers are expecting the high quality production and the well made ending.

The script writer Jung Yoon-jung says, “I am aware of all the viewers’ expectation they write on the bulletin board. All I am focusing on is writing an interesting story. I hope the viewers enjoy each episode with comfort.

Whereas, some viewers are complaining about too much talk and prediction going on saying that it might lessen the expectation of future episodes.

The writer Jung Yoon-jung also says, “<Tale of Arang> has an unconventional conflict between the good and the bad. The genre of this drama would be fantasy romance adventure action with the touch of mystery added. I am focusing mostly on making it interesting. So instead of trying to solve all the mysteries, I hope the viewers enjoy each episode leisurely.” But the viewers are still saying, “I hope one week consists of only Wednesday and Thursday. Waiting 6 days for the next episode is too long”, “This drama makes me think a lot. I can hardly stay alert for one full week,’

MBC’s fantasy romance <Tale of Arang> is based on the Korea’s legend where Arang(actress Shin Min-ah), a sad ghost, wants to finds out why she had to die. Eun-oh is a district magistrate who falls in love and helps her. <Tale of Arang> is broadcasted every Wednesday and Thursday night from 9:55pm on MBC.