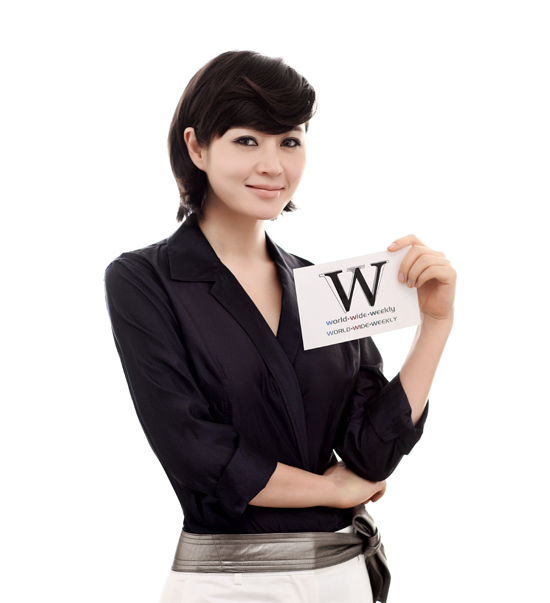 Actress Kim Hye-soo who is an avid watcher of current events and news from around the world has been signed on to host “W.”
Kim Hye-soo, one of Korea’s most popular movie actresses, takes a new turn in her career by signing on to host the news documentary show, “W.” The show “W” is Korea’s first in-depth worldwide news show.
During her 25-year acting career, Kim Hye-soo also had stints as a talk show host and got involved in mainstream culture and arts. This year, Kim will take a new direction in her career by hosting a news program.
Having an actress like Kim hosting “W” might be a mild surprise to viewers but for Kim, it’s a natural evolution in her career. She actually appeared in a “W” episode that aired in November 2008 as a member of the “W” reporting crew on an assignment to Nepal. She helped distribute food to the local people and did other aid work that benefited children. She amazed the reporters by lifting a 30-kilogram rice sack and carrying it to the warehouse. When it came time to wash the children’s hair that was ridden with lice, she did it without any hesitation.
The network had been discussing ways to transform the 5-year show and came up with a pool of candidates to replace the current host. The discussions led to approaching Kim Hye-soo for the job and after meeting with her, she was enthusiastic about hosting the show. One of the persons involved in the discussions say, “She was very enthusiastic. Beyond anything we expected.” “I’m sure she’ll be the perfect host for our news show,” he added.
In interviews, Kim has revealed that she is a fan of documentaries and so it is no surprise that was willing to join the “W” show. Kim has a wide range of interests that include topics about nature, animals, the environment and much more. She mentioned watching Tears in the Arctic and Tears in the Amazon, both of which are MBC documentaries, with her nephew and how much she enjoyed them.
Kim Hye-soo says, “I like the straightforward way that ‘W’ depicts world news in the five years it’s been on the air so far. It’s a dream come true for me to be involved with a documentary program.” “I hope to live up to the expectations,” she said.
She says that she’s acquainted with young environmental activists who are a source of inspiration. Currently, she is very interested in Indian eco feminist Vandava Shiva, who is also a philosopher, environmental activist, and David Mayer de Rothschild, head of Adventure Ecology and heir to the Rothschild banking empire.
Meanwhile, Choi Yoon-young, who hosted “W” for the last five years, will appear for the last time on July 2nd in a special anniversary feature and then hand the show over to Kim Hye-soo. On July 9th, Tears of the Amazon: The Movie will air in place of W for one episode.
Slated to premiere on July 16th under the new name, “W with Kim Hye-soo,” viewers can tune in at the same hour every Friday night.