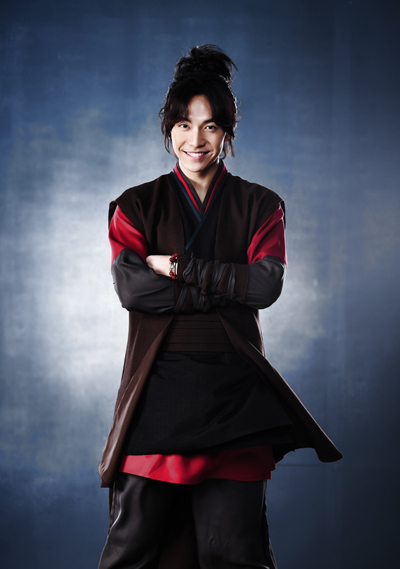 Lee Seung-gi stars in MBC’s new drama series [Kang Chi, the Beginning] as a ‘half-man and half-beast’character and he expresses his resolution in this interview.

Lee Seung-gi’s character, Kang Chi, is born between a deity who looks after the mountain and a human lady. Kang Chi is very reckless with a natural born curiosity. Accidently he learns that he himself is ‘half-man and half-beast’and this makes him live a second life.

Lee Seung-gi decided to star in [Kang Chi, the Beginning] because of his firm trust for the script writer Kang Eun-kyung and he said, “I am training myself in action school and horseback riding trying to get close to this Kang Chi character.”

Lee Seung-gi is coming back to the TV screen in 10 months after he finished MBC’s drama series [The King 2 Hearts] and he is partnered with Suzy for the first time.

[Kang Chi, the Beginning] is a light martial arts costume drama series about a ‘half-man and half-beast’Kang Chi who struggles to become a perfect human being. MBC airs the first episode on April 8th, 21:55.

Here is the interview with Lee Seung-gi.

Q. What made you decide to accept the role in this drama?
A. While I was shooting the previous drama [The King 2 Hearts], I have met Kang Eun-kyung, the script writer. I have promised to her then that I would star in her next drama no matter what drama it is. And I was even more encouraged to know that the director Shin Woo-chul is directing [Kang Chi, the Beginning].

Q. This being your first costume drama, do you feel any pressure?
A. I did worry about it because there is usually a certain format to the costume dramas. I cannot style my own hair style and I cannot wear any clothes I want. But the staffs are preparing very well and I am becoming very close to the Kang Chi’s look described in the script.

Q. You look more nimble than before.
A. I have tried to look like Kang Chi character. I wanted to look nimble so I have been training myself in action school. I learn the martial arts actions, do the horseback riding and I am trying to look professional. I also have worked out and lost 3kg of the weight. Through this drama, I want to show Kang Chi instead of Lee Seung-gi.

Q. How was your expression of the first shooting day?
A. It was very comfortable. Everything was very harmonious and it did not feel like the first day shooting. Director Shin Woo-chul’s directing is very clear and it helps you perform the best.

Q. You are now very active in acting for the drama series such as [Great Expectation], [My Girl Friend is Gumiho], and [The King 2 Hearts].
A. I think I have shown my progress through these 3 drama series. You can really learn a lot for working in each drama. I want to show more progress through [Kang Chi, the Beginning].

Q. How do you describe the drama [Kang Chi, the Beginning]?
A. It is a fantasy of a reality. It is like a comic book set upon a strong plot. The script is very entertaining and I am really having fun shooting for this drama.

Q. You have partnered with Suzy. What is her charm?
A. She is very refreshing. I have always partnered with elder actresses and Suzy is the very first younger actress I have worked with. She is 20 years old and her energy is being a big help in the shooting location.

Q. What is the similarity between Kang Chi and Lee Seung-gi?
A. They are both simple and honest. The only difference is that I am a bit more realistic than Kang Chi. (laugh)

Q. What do you want to show through [Kang Chi, the Beginning]?
A. Masculine charm, charisma, softness... whatever it is, I want to show the new aspect of Lee Seung-gi that I have never shown before.