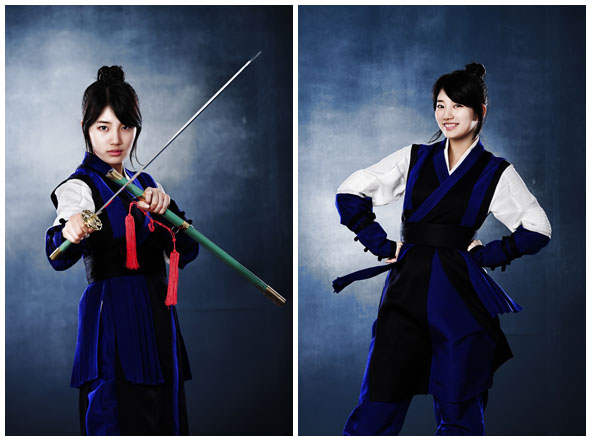 The heroin of the drama [Kang Chi, the Beginning], Suzy, is a member of Girl group ‘MISS A’. This is her first time acting in a costume drama. She has acted in modern drama [Dream High] in 2011 and [Big] in 2012. She is coming back to the TV screen in 9 months. [Kang Chi, the Beginning] is written by Kang Eun-kyung and directed by Shin Woo-chul & Kim Jung-hyun.

“I was more attracted to this drama because it is a love story between a human and a half-human-half-beast. The script is also very interesting. I used to like vampire stories... well although [Kang Chi, the Beginning] is not quite a vampire story, I was very much attracted to it.”

In order to cover the high level action scenes as a martial arts instructor, Suzy has been training very hard from the beginning of this year. She has been training for horse-ride, action school, costume drama acting... she is now ready to show the viewers what she has not shown yet. One of the staff admired her by saying, “because she has learned Tae-Kwon-Do since she was young, she learns the actions very fast and she has a very good posture.”

Suzy said “My charm? Well.... I don’t know. (laugh) Maybe I have very fresh energy because I am young? I will try my best to show the good acting.”

Suzy is also a bringing the energy to the shooting location by her bright and friendly charm. She is the busiest star now both acting on the TV screen and singing & dancing on the stages. In [Kang Chi, the Beginning] she is partnered with Lee Seung-gi, who was also a singer and debuted to the TV screen ahead of her.

“Lee Seung-gi is very kind. He makes the shooting location very comfortable so that I could bring out the most of me. I think [Kang Chi, the Beginning] will be the most memorable drama of my life.”

MBC’s new drama [Kang Chi, the Beginning], following [The King’s Doctor], is a light, martial arts costume drama. Kang Chi, the main character is a half-human-half-beast who is struggling to become a human.
This drama is directed by Shin Woo-chul who has directed [Gentleman’s Dignity], [Secret Garden], [Lovers in Prague], [Lovers in Paris]. and written by Kang Eun-kyung who has written [Glory Jane] and [Bread, Love, and Dreams].
The casts are Lee Seung-gi, Lee Sung-jae, Cho Sung-ha, Lee Yeon-hee and many others.