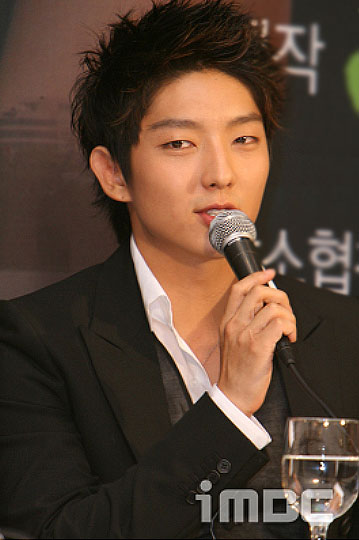 The star Lee Jun-ki, who is coming back to TV after he has completed his service in the army, shows his resolution for his acting in MBC’s new drama <Tale of Arang>.

During the interview, he was asked “how do you think it will be if you really have the ability to see ghosts?”. He replied “I would be very much afraid of it. People say that if you see a ghost on the shooting location, the program will be successful, but I am sure this drama has a full potential to be successful even if we do not see any ghosts. If I have the ability to see them, every night will be very tiring listening to their regretful stories.”

<Tale of Arang> is based on the Korean legend. The legend says, in one Korea’s suburban region, a girl ghost named Arang appeared to the local magistrate every night asking him to solve the mystery of her death. All the magistrates had fear for her, but there was this man who was brave enough to listen to her story and tried to put her death rightfully. Actress Shin Min-ah is acting this cute girl ghost ‘Arang’ and actor Lee Jun-ki is acting Eun-oh, the magistrate who tries to solve the mystery of her death.

Q. <Tale of Arang> is the first drama you have chosen after you came back from the army. What is your resolution?

A. I was very considerate because it was the very first drama to appear after coming back from the army. There were many choices but I wanted a drama which I could go closer to the viewers. Among many, I eyed on <Tale of Arang>. From the actor’s view, this drama’s theme and the story felt quite new and fresh.  It made me wonder how the drama will turn out with such a unique theme. I felt that it could be very interesting. Many new things could be tried on because it was a fantasy costume drama. And story could be very interesting and touching at the same time. I will make sure that all the fans who has been waiting for me to come back could fully enjoy this drama. You could give it a try!

Q. Is there any typical reason you have chosen the costume drama?

A. What worried me most was that I might have lost the feel of acting. The costume dramas, I have always thought, is not limited in any genre. You could try many skills of acting in a costume drama. I thought it could provide me a vast ground to present the various kinds of acting abilities. I was indeed a little timid to come back after a few years of absence. So I needed a bigger ground to try several things to gain back the same old acting feeling. I am really ready to pour all of me into this drama. So much to meet the expectation of the viewers, I will do my best to present the new character, the charming character and all my charm I could not show for last couple of years.

Q. Could you explain about your character?

A. My character ‘Eun-oh’ is a sad character who has his mother in the center of his world. He finds no meaning in the world other than chasing the traces of his mother. Because of his yearning for his mother deep in his heart, he looks cold and cynical outside but he is indeed a man of a warm heart. He sympathizes with people around him but he is not accustomed to show it. I really wanted to act this two sided character. I have never acted such a cold and abrasive character and that’s why I was attracted to ‘Eun-oh’. And I felt more attracted as I found out the soft part of his heart.

Q. ‘Eun-oh’ can hear and see the ghosts. How will it be if you really had such ability?

A. I would not like it. Because this is a ghost drama, I am always in the fear of seeing a real one. I hope I could never see any. (laugh) Some superstitious people say that the drama will be a success if any staffs see any ghosts on the shooting location but I am sure this drama will be a huge success even without seeing any. Eun-oh sees the ghosts, and the ghosts also know this. Every night they come to him and ask him many chores because he is the only one standing on the boundary of the living and the dead. I think it will be a very tiring thing to meet the ghosts every night and listen to their regretful stories. I would not want to stand in Eun-oh’s shoes in my real life. (laugh)

Q. You are very friendly to other staffs. How is the atmosphere of the shooting location?

A. Everybody is trying to keep it good. Good act comes from good atmosphere of the location. I think it is very important that every staff has the feeling that it is their own drama. I am also trying to communicate with all the staffs on the location. I really like working with them. They are all like brothers and sisters... and we are always very encouraging to each other.

Q. How did you feel on the very first day of shooting?

A. I was very thrilled. I can’t even remember how that day had passed. I  concentrated only on my acting without looking around and the whole day passed like a moment. In fact I was just so happy to be back to the shooting location.

Q. I heard that you have studied a lot on the matter of life and afterlife. What do you think is the most interesting point of the drama?

A. I think the viewers will find episodes with the death angels funny and comical because they are depicted in a different and unique way from general images. First, I think it is a brilliant idea to start from the Korea’s ‘Legend of Arang’. And it is very curious that the drama genre is ‘fantasy melo drama’. The viewers will find it very interesting and attractive.

Q. What is the most expected scene of the drama?

A. The melo dramatic scenes from Arang and Eun-oh’ relationship will be very interesting. It is somewhat different from general romantic comedy. And also, there are many various action scenes. As we have put much effort to it, I hope it turns out to be spectacular.

Q. How was your first meeting with other actors and actresses?

A. It was very enjoyable. Everyone is very friendly and they all have big  anticipation to this drama. Each day, I like to start the shooting with cheering drinks and at first this made other staffs embarrassed. But it worked as an ice breaking which brought us close together in a short time. (laugh) Especially I became very close to Kwon Oh-joong, who is acting the role of my servant ‘Dol-Shae’. We could spend a whole day fooling around with funny jokes. All the staffs are friendly and I think we have the best teamwork here.

Q. In some other interview, you have mentioned that you will be showing a romance which you have never shown in any other dramas.

A. I am anticipating it myself, too. The whole scripts are not yet completely written so we could imagine many possible ways of the story. For instance, how will the story go and how will my character change in the coming episodes? And since the root of the story is a romance, we all wonder how the romantic relationship will be leaded. Although this drama is a costume drama, since it is a ‘fantasy melo’ costume drama, I think it will have more romance aspect than any other costume dramas I have done so far.