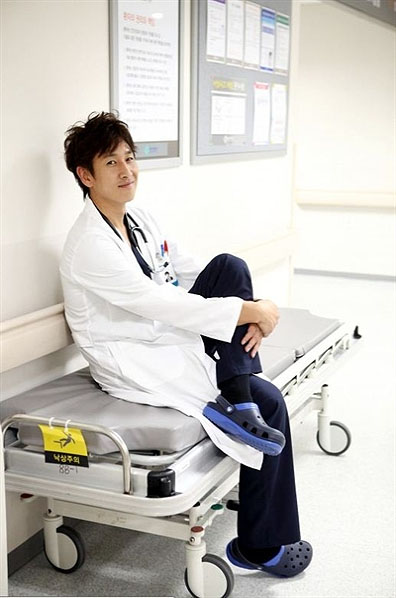 Sun-gyun Lee is coming back to TV drama after two years and four months with MBC Drama Series <Golden Time> airing from September 2012.

Min-woo, Sun-gyun’s character, has been lack of vocation. After graduating medical college, he has been temporarily teaching without passion. One day in an emergency room, he was shocked to witness a death of an injured. This made him apply for the internship and start a new life as a doctor.

“I have made up my mind to join this drama because of my strong faith in the producer Seok-jang Kwon,” he said. He also said, “<Golden Time> is about maturing of a doctor who works in an emergency room where life and death are so intense. The drama tells about doctors and their vocation.”

Drama series <Golden Time>, following after <Light and Shadow>, is depicting the life and love of doctors in emergency rooms and the shooting takes place in Busan starting from May 2012.

The drama title ‘Golden Time’ means the critical time left to save the patient  which is 1 hour within injury and 3 hours within stroke. The producer Seok-jang Kwon is the master of romance who has produced <Pasta> and <My Princess>. The first episode starts airing from July 9th 2012, 21:55.

Q. <Golen Time> is your second medical drama after <Behind the White Tower>. Is there any specific reason you decided to join this drama?

A. Most of all, I have a good faith in producer Seok-jang Kwon. He is very friendly in all the shooting locations and communicates very well with actors and actresses. I had heard that he was staring a new project and I had actually been expecting him to call me. What’s more, the story is very tense and the characters are very attractive. This is how I made up my mind to join this drama.

Q. All your dramas and films are successfully making hits. What do you think your own attraction is?

A. I don’t think the success was due to my own attraction. I think I was just lucky to have met good staffs, good producers, directors and good writers. Again with their inspiration, I expect a great success for <Golden Time>, too.

Q. You are earning good reputation in both TV dramas and theatrical films. What is the difference between them?

A. Making a TV drama seems to be physically much harder than making a film. Because the schedule for TV dramas is very tight, you could concentrate more. And the reaction of the viewers is very fast. Because the reaction is so fast, it feels like you are taking exams everyday.

Q. How do you think of <Golden Time>? What makes this drama different from other medical dramas?

A. The big difference is that the setting is in an emergency room in this drama  where the life and death is ever so impending. All the various episodes will be that tense. The story is about my character Min-woo‘s learning and maturing of a doctorship and about his vocation. The drama contains various themes and stories that will attract all the viewers of all ages.

Q. Drama is all set in Busan. What are pros and cons?

A. The concentration on the project is very high since all the staffs are staying together all the time. And because we don’t have to move around for many locations, it saves time. We can always look at our scripts in all the resting times. But I miss my family.

Q. You have been acting with many popular actresses like Hyo-jin Gong, Soo-jung Lim, Min-hee Kim, Kang-hee Choi.... how are you getting along with Jung-eum Hwang? How do you find her attractive?

A. We are still learning to get along. We are very comfortable to each other and try not to make any barrier for the communications. She is very cute and bright. and that is her charm.

Q. ‘Golden Time’, the medical term, means three last critical hours to save the injured. What do you think your own golden time is... the time you could not let go of.

A. I think my golden time is now. I am so happy now that I can devote myself to acting. I am the most happy whenever I am acting.