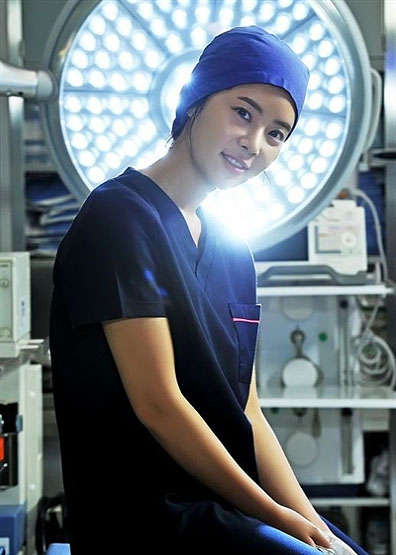 Jung-eum Hwang, the heroine in MBC drama series <Golden Time> said “it was time for me to move forward and I was lucky to meet <Golden Time>”.

She has expressed her affection to the drama <Golden Time> during her interview on July 5th, 2012. In this drama she is acting an heiress who is to succeed five  hospitals but currently practicing an internship in an emergency room.

Although she is a promising heiress, she is not at all interested in running the hospitals. She is a very resolute girl who feels responsible for the affairs aroused in the hospitals and she has a strong will that she wants to take part in all the affairs herself.

Previously in the press conference, the producer Seok-jang Kwon has said “Jung-eum’s character is very bright that she does not lose that brightness even in the exigency of the emergency room. And this is why I hit on Jung-eum the soonest I read about the character.”

<Golden Time> is the drama series set in one general hospital’s emergency room where the doctors’ lives are intense and love is passionate.

Q. Isn’t it hard to act in a medical drama?

A. It’s not difficult to memorize the scripts but the medical terms are hard to get used to. It’s quite hard that I have to speak those medical terms rapidly and correctly. I always ask a lot to the senior staffs on the difficult parts of the scripts. Sometimes I even worried a lot being afraid that I might be the only one who is not understanding the situation in the scripts.

Q. How do you find it difficult to act on this drama?

A. Until now, whenever I faced difficult situations, I tried to look at the positive side and told myself that everything will work out. But while doing this drama, at first I felt that I have met the limitation. At first I even regretted having started this drama when I faced the difficulty. But as time flowed, my thought changed to ‘I am the lucky one to have joined this drama’. Things are not easy, but this drama means much to me because it was time for me to move on.

Q. How are you getting along with Sun-gyun Lee?

A. Sun-gyun is the master of impromptu dialogues. I have been acting very royal to the scripts. So when Sun-gyun said some unexpected line, my just went blank not knowing how to respond. So at first, I disliked him for this. (laugh) But as time went by I thought ‘so.. this is real acting’. I might look tensed in episodes one and two, but as it goes on, you will see how Jung-eum Hwang is improving even making up her lines which are not written in the scripts.

Q. Have you ever seen surgery scene in your real life?

A. I have been to the ‘intense care room’ for three times. But I’ve never seen any surgical scenes. I only thought of myself before shoot started. I wanted to see the real urgent surgery in order to draw the basic picture of my acting. But when I went into one real surgery room, I felt that it was out of manners. I was only studying for my acting, but in the real sight, there were life and death among doctors and patients. So instead I have seen many clips of real surgery and studied with those clips.

Q. <Golden Time>’s shooting location is in Busan. How is that with you?

A. I am so glad that I am healthy enough to follow all the harsh schedules. We shoot for 30 hours full but everybody is following along. I barely manage to stay on my feet and they praise me for that. Sun-gyun and Sung-min are jealous saying that I am being praised because I am an actress. It is taken granted that actors are stronger. We have been shooting for a month now and we are sleeping and eating in short moments whenever there are small chances. Because I am not the only one working hard on the scenes, I am not a bit depressed.

Q. As an actress, it might be hard for you to not look beautiful in the scenes of an emergency room.

A. It might rather look awkward to look beautiful in an emergency room. I find it rather comfortable to look natural. I don't have to put too much stress over make-up. I am not worried but other staffs do. (laugh)