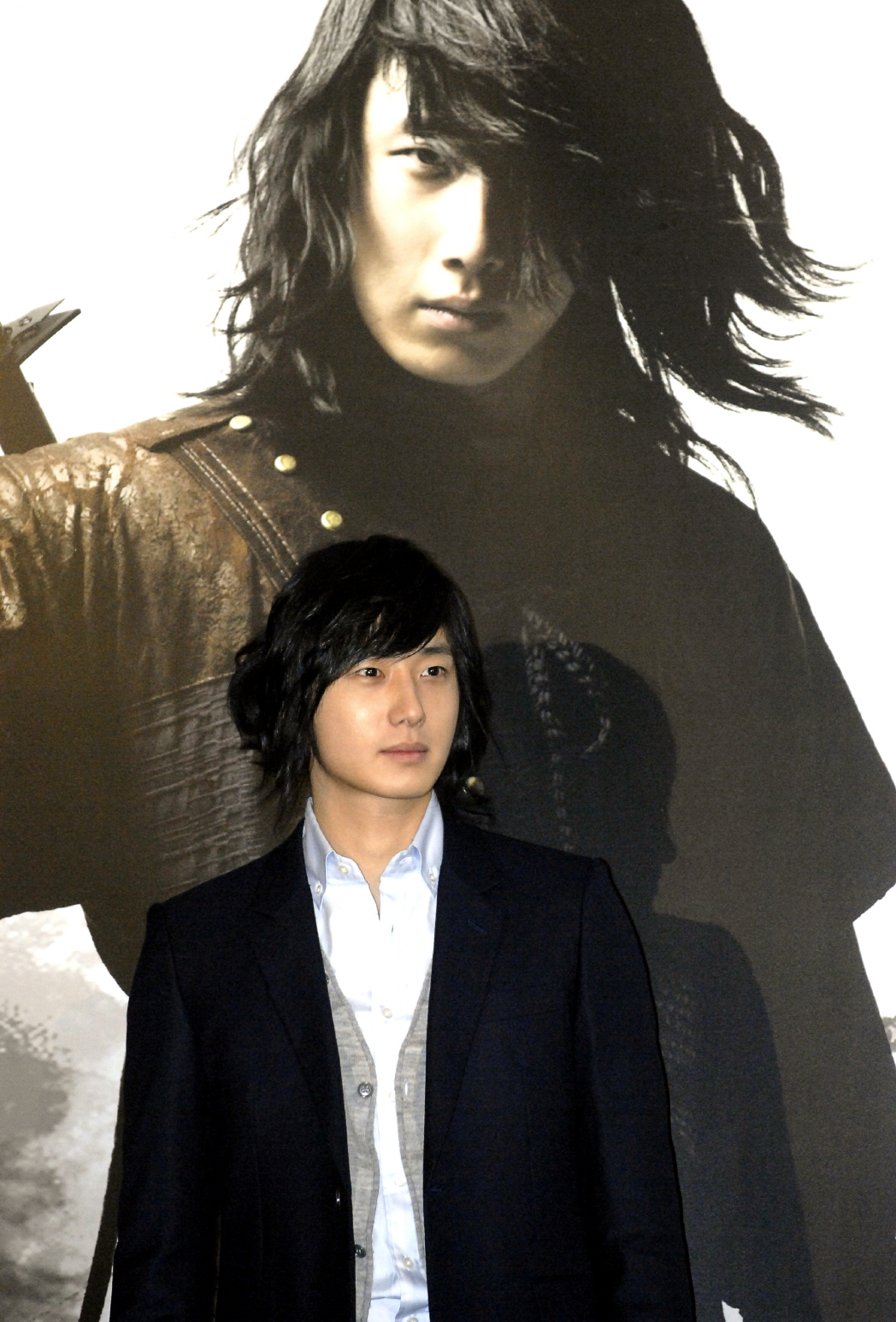 A press conference introducing the new MBC TV miniseries, Moon River which has been co-written by Kim Gwang-shik and Do Young-myung and co-directed by Hwang In-lwe and Kim Soo-young took place at the Seoul Cineplex Theater on January the 7th.

Moon River is based on the graphic novel Iljimae written by Koh Woo-young. Director Hwang In-lwe whose works include the hit TV miniseries Princess Hours will direct Moon River and people are expecting his new TV show to open a golden era of period dramas in 2009.

Actor Jung Il-woo will play the Joseon hero Iljimae, who emerged during tumultuous times when people were craving for a hero. Featuring an androgynous look with deep set eyes that seem to mask anger and sadness all at once, actor Jung Il-woo seems to have jumped right out of a Koh Woo-young?s graphic novel. Portraying Iljimae in Moon River will be the first time for Jung Il-woo to play the leading man and he?s eager to prove his acting talent in this pivotal role in his career.

As the first period drama to be shot on location in three countries including Japan, Korea, and Taiwan, 70% of the production of Moon River has been completed already and it will premiere on MBC on January 21, 2008.

The following article was excerpted from an interview that actor Jung Il-woo recently gave.

- Tell us about your role.

- Iljimae has sad childhood experiences but he overcomes the hardships that he endured during his formative years and becomes a good thief who steals from the rich and gives to the poor. He?s a hero who saves the common folk.

- What do you think is the most important characteristic of Iljimae?

- There are times when you're not sure what is important and what?s not in life. Iljimae is a character that is strong and cool-headed on the outside but inside he?s a lonely person who longs for love. I think there?s a need to delve into his complicated personality.

- Do you feel any pressure to appear in your first period drama?

- I don?t see much of a difference between period dramas and regular TV miniseries. Though Moon River is set in the Joseon era, the dialogue isn't that different from contemporary-themed TV series. It?s not very different.

- What's your impression of the graphic novel?

- Although the graphic novel was written a while back, there?s a modern touch to it and the story plot and characters are very interesting. I always thought of Iljimae as a cool hero but during rehearsals, I found that he's actually someone who's been through tragedies. It was a challenge for me to portray Iljimae but I got a lot of great direction from the director so that helped a lot.

- Well, I read about Iljimae beforehand but when we started to shooting the show, I found that what I had in mind was very different from the director's perspective. So for about 5 months, I had a hard time getting into my role. The director got upset at me quite a few times and I struggled to do my best. Now I think I've settled into my character.

- How different was your take on Iljimae from the director's view of that character?

- I had my own opinion of what Iljimae was like while the director wanted to faithfully portray the Iljimae straight out from the graphic novel. During shooting, the director would tell me to suppress my smile because that?s what I do a lot. He also made sure I spoke in the tone that was becoming of Iljimae. I tried very hard to get into character. After a while, the director said that it was OK for me to show a bit of my own personality in my role. So that has made things a whole lot better for me.

- What did you learn from the director?

- He changed the way I approach acting. He?s very meticulous and keen on little details. Not only did he want my character to be androgynous but also have a bit of edginess. It took a lot of hard work to become like that.

- How did you prepare yourself for playing Iljimae?

- After High Kick ended, I weighed about 70 kilograms. I work out a lot now and that has brought my weight down. And for the first time in my life I grew my hair long. I also tried very hard to modulate the tone of my voice.

When I gain weight, it?ll show on my face. When I?d go home, my mom wouldn't give me dinner because she said that Iljimae is a sharp-looking character, not a plump-faced guy. (smiles). I lost about 7 to 8 kilograms.

- What do you think about the feminine look of Iljimae?

- I don?t have any feminine traits. Iljimae is a masculine type of hero. But there are times when he disguises himself as a woman to sneak into homes and so I just try to follow the plot of the scene.

- Any interesting things that happened while filming in foreign locales?

- We filmed scenes in Taiwan and Japan and Taiwan has a hot climate. When we first began shooting scenes, I didn?t know what the director wanted so I focused on acting and had little time to do anything else. During our scenes shot in Taiwan, we showed Iljimae living a comfortable life but when we moved to Japan, Iljimae faces a lot of hardships so I was told to act differently to the new situation.

- Were the action scenes hard to handle?

- Yes, they were. We would usually have to stay up all night when we had to shoot an action-packed scene. It was exhausting and when it was cold outdoors, we?d get a lot of injuries. I tried not to get injured but you know I like taking the rides in amusement parks so the scenes where we?re suspended by wires were actually lots of fun.

- Did you have any interesting actions scenes?

- Well, I didn?t have a lot of time to prepare for it. I trained at the Action School for just a month and also practiced in between shoots. My martial arts instructor told me that not only is it important to practice moves but building up your endurance and exercising is just as important. So I jogged 7 kilometers every day.

- You didn't seem to be in good physical condition.

- After working under a tough schedule for five month, I was on the brink of exhaustion. I had to get IV drips hooked up to my arm after shooting a scene. I took a strong medication prescribed by my doctor and that made it hard to work on the set that day. The director took one look at me and said that I should get some rest. I felt really sorry that we had to cancel the shoot when the entire crew was ready to start shooting. I'm trying hard to stay healthy these days.

- How have you changed your image from a young teenager into a young man?

- In High Kick, I was extremely lucky to catch the attention of viewers and that helped my career. In Iljimae, I go to the set every day as if I'm preparing for a test so I don?t really have a strategy in trying to make the transition from teen actor to adult actor.

- Do you feel any pressure about being compared to Lee Jun-ki who also portrayed Iljimae?

- I?m ready to handle any criticism from viewers and other people.

- What do you think about your acting abilities?

- I?m never satisfied. But my focus isn't really about acting well but rather, I?m trying to learn as much as I can. You can?t become an excellent actor in the beginning.

- I'm going to trust the director and follow his lead. I just want to do the best that I can and absorb what is useful.