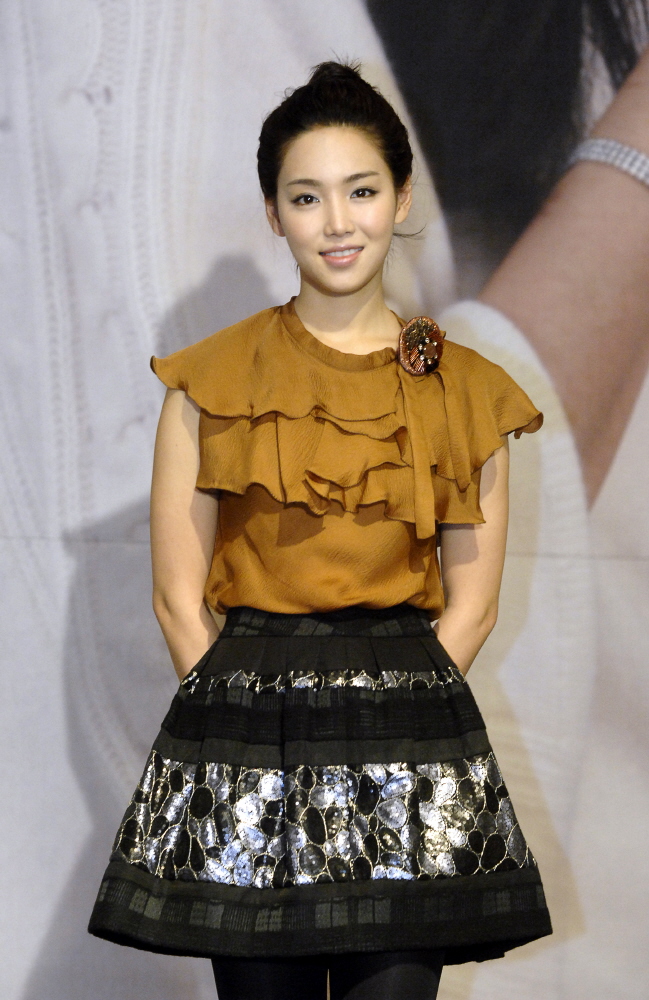 The new MBC TV series called "I Love You, Don't Cry" (writer: Park Jung-ran, Directors: Kim Sa-hyun, Lee Dong-yoon) was announced at a press conference held at the Imperial Palace Hotel on November 6, 2008. Featuring actors Lee Yu-ri, Lee Jung-jin, Oh Seung-hyun, Lee Sang-hyun, "I Love You, Don't Cry" will be a heartwarming story about people who lead different lives and learn how to forgive each other through love and understanding.

Actress Lee Yu-ri will play the role of Cho Mi-soo who is a woman with a bright personality but has problems finding a job. Lee is a hardworking actress who is always focused when she's on the set. Despite having a demanding shooting schedule, she shows a lot of passion by rehearsing her lines with the cast after every shoot.

As a story about family, "I Love You, Don't Cry" will premiere on November 17, 2008 and revolve around family members of a woman who is in love with a divorced man whose wife divorced him because he had a child in a previous relationship that he kept secret from her.

The following interview was excerpted from answers that Lee Yu-ri gave during the press conference.

- Why did you choose this role?

- I didn't go around and pick it. My character in "I Love You, Don't Cry" is this young woman who is full of energy and outgoing. She has a soft side, too. So I took the role.

- What do you find charming about your character?

- I played several previous roles where I portrayed subdued and calm personalities. So I think people have a positive view of me as a nice person due to the roles I've played. Now I'm playing a tomboyish character who is outgoing and likes to have fun. I'm comfortable in my new role. She has a lot of energy and it makes it great to play such a positive-thinking character. I look forward to every shoot.

- Don't you think your character draws more sympathy than your previous roles?

- When my character Mi-soo cries, she's not really crying out of sadness. It's her way of expressing the strong emotions she has. When she faces a difficult situation, she'll overcome it in her own style. I'm going to stick to the script written by our writer.

- We heard that you'll experience how youth unemployment is affecting society.

- My character finds work as a magazine reporter. So in one assignment, I interview Lee Jung-jin's character. Actually, I'm observing all of the reporters here. I've noticed that you keep your eyes on me while typing away on your laptops. I have a lot to learn. (smiles)

- Actress Kang Boo-ja said to me, "Let's do another great job," when we were rehearsing our lines on the first day. And actor Lee Soon-jae is a very warm person who is meticulous in his preparations. Both of them are so friendly to me and I'm glad to be working with them again.

- How about the other cast members? Is it working out fine on the set?

- I'm having lots of fun on the set and we're working together smoothly. In the beginning of the show, my character doesn't get along with Young-min. So when Lee Jung-jin, who plays Young-min, tries to joke around with me, I don't laugh or anything. If I get too friendly with him then I might lose my focus during a shoot where I'd be quarreling with him. So I'm keeping my distance. (smiles)

- The previous TV shows that you've appeared in had high TV ratings. Are you confident that your new show will do well, too?

- You don't have any control over TV ratings. The crew is doing a great job and the cast is very dedicated so I think we'll get good results.

- Don't you ever want to play a villain?

- I played a villain in my debut role. Afterwards, I played nice characters for the next three years and I'm thankful that I'm getting favorable reviews. I think it will be fun to play a villain again later on. I am eager to play different kinds of roles.

- I change a lot after I play a role. I sort of assimilate myself into the role I play. If I play a calm character, I'll become calmer, too.

- Do you think you've been less noticed than other actresses even though you've given solid acting performances?

- I take that as a compliment. Well, I don't think it's like that. I think I lack in several areas. Thank you for the compliment.

- Do you have any male friends who you would like to date?

- I don't have any close male friends like that. I draw a line in my relationships. I find it uncomfortable when I'm not sure if we're friends or in a serious relationship. In the TV series, Sang-yoon is a childhood friend of my character so it makes sense that they started out as friends before dating. But the character I play is not interested in guys at all.

- What are your personal impressions of the TV series?

- The story is fast-paced. When Young-min becomes a single dad one day, he faces a lot of difficult situations. The drama follows the different lives of four people as they mature. There's a lot of interesting stuff that happens to the family and the four main characters. We're having a great time on the set and I hope many people will be delighted with the show.