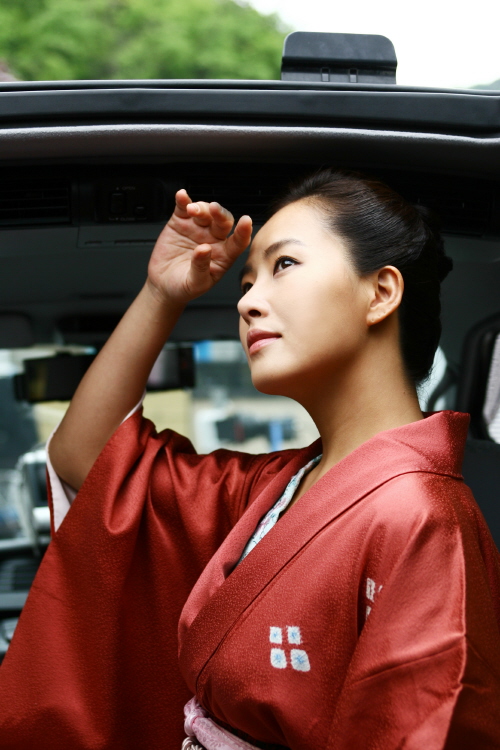 Following the end of the TV miniseries Lee San, Wind of the Palace, the new MBC TV miniseries Night after Night premiered on June 16, 2008 and actress Kim Seon-a plays the main character Hur Cho-hee. Actress Kim tells us about how she feels about the importance of cultural heritages.

Kim Seon-a portrays a patriotic inspector of cultural heritages. She has returned to the small screen in three years after last appearing in My Lovely Sam-soon.

Kim Seon-a began shooting scenes for Night After Night on location in Kanagawa Prefecture and Ishika in Japan between June 7 and 14. In these places, the crew shot scenes around ancient ruins and the actress was full of energy during the entire week.

Kim Seon-a has starred in many hit romantic comedies and now she is completely committed to her new show that emphasizes the importance of cultural heritages that are found around the city but largely ignored.

She tells us about the shock she felt when seeing Namdaemun Gate (National treasure No. 1) burn down on the 9 o'clock news due to arson.

Q)  This the first TV miniseries that you're starring in after 3 years. You seem to have a special karma with MBC. Many of your fans remember your role in My Lovely Sam-soon so does that put any pressure on you?

- Even if I tried to shed my image as Sam-soon, I don't think it would change the way I am perceived. I don't want to make a conscious effort to change my image. I think people will see traces of Sam-soon in this new TV miniseries but I hope lots of people will watch the entire show instead of just the first two episodes because my character is different from Sam-soon.

Q) What was the main reason you chose this project among other offers?

The timing was perfect. I received the Night after Night synopsis right after I had finished filming Girl Scout. I think it took me six months to make a decision to do it. I met with the studio president and the writer. We discussed my character and then I met with Lee Dong-geon and then we jointly decided who would direct it...

I didn't really see my character Hur Cho-hee as being both sexy and patriotic in her duty to protect cultural heritages so we made a few changes. I didn't feel like we could develop the character that way. Part of her job is catching tomb looters but then she also has to grapple with her past and that makes her hesitant to open up to other people. Then she meets Kim Beom-sang, and they develop a rivalry at first and later fall in love so it's a romantic comedy. Unlike my other TV shows, it's not just a romantic comedy. There is more interesting elements in it and it could be hard for viewers to take all that in but the cultural pull in the TV series will appeal to viewers if we strike the right balance.

Q) Along with actress Kim Jung-eun, you?re known as a top actress in romantic comedies. What do you think about that?

Well, I'm not sure about that. I can do more than comedies, you know (smile...). I think people are being generous when they say I'm a good actress for romantic comedies. Instead of trying to push myself to portray an emotion, I rely on my instincts and experience when I act. And along the way, I began to become more natural in relying on that skill. I'm just deploying the tricks of the trade. You need to widen your horizons as an actor and be open to new kinds of roles. I try to be a good listener and absorb what I see. So I gravitate to roles that can exploit my strengths, which makes it easier to play. When I appeared in My Lovely Sam-soon, I was a stickler on little details. I think that connected with many female viewers. I hope that I'll succeed in making Hur Cho-hee appealing to them as well.

But sometimes my ideas about a character can be the opposite of what viewers are thinking. If I try to follow what I think viewers will tend to like, then that could backfire. I want to feel comfortable in my own skin when I'm acting. In this TV drama, the theme will be cultural heritages, which can be hard to make interesting but I'll do my best to make it a fun drama to watch.

Q) Did you see the news about the Namdaemun Gate arson incident? What went through your head at the time?

I saw the gate on fire on a live broadcast. I was very sad to see it burn down like that. Then I felt ashamed of myself for no particular reason. It was just shocking to see it disappear like that. So I think there's karma in how I was led to get involved in this drama project. I realized that as a society, we share

When we shot one episode on location in Japan, I was impressed that many buildings and homes were designated as historic monuments or cultural heritages but we were allowed to shoot our drama there. There were limits on the size of our crew that could enter those places and we had to work at certain hours. But I was able to see how they cared about their heritage and protected them.

It's natural to protect historic places that our ancestors left behind for us and then it's our duty to hand them down to the next generation but I think we made a big mistake by allowing a fire to burn down Namdaemun Gate. I know that our society is always looking for new trends but now I realized that old traditions are also precious.

Q) What is the most important treasure in your life?

My family is my national treasure.

Q) What do you think about actor Lee Dong-geon?

The first impression I get from reading a script is vital to me. What I mean is that the first script rehearsal I have with my co-star is very important and Lee Dong-geon is a sensible, down-to-earth guy. And his jokes are absolutely hilarious (smile). He's full of emotions. But more than anything else, I'm thankful that he's trying to overcome his recent brother's death by being a positive presence on the set. I hope time will help him deal with his loss.