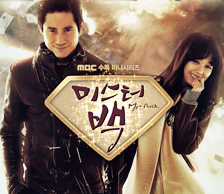 A charming and intriguing leading character can attract more interest among TV viewers than a tight story plot. Leading TV characters can range from a female crossdresser, a woman who can see ghosts, a man who can read people’s innermost thoughts, and even an alien. This show presents a new character to viewers. An antihero who is physically in his 30s but mentally in his 70s. An interesting character who is young and handsome but talks and behaves like an elderly man. Instead of presenting yet another young scion of a wealthy family as the main character of the show, this sitcom portrays a materialistic, greedy elderly president and founder of a large conglomerate who falls in love. The main character reveals his rotten personality in a comical fashion. Choi Go-bong will arguably become this year’s best character on TV.
As people age, beauty is the first thing they lose. Smooth, taut skin turns wrinkly. Bellies turn saggy. And men, mostly, start to see their hairline recede. It’s not only confined to your looks though. The aging process also affects the whole body. You experience more aches and pains in old age. Then there is the cold shoulder treatment that the elderly get from society. Youthful beauty starts to fade and then you end up as an old person with numerous ailments of the mind and body. That is why men and women of all races in every era yearn to be young again. If you could be just ten years younger or even one year younger... Heck, just being a little younger than you are right now is a wish come true. It’s no wonder that there are so many anti-aging products on the market that promise to give you a youthful look. People who look younger than their age are deemed as perfect people. However, no matter how hard you try to stay young, there is no stopping the inevitable process of aging. But what if there really was a drug that could make you young again? An elderly man in his seventies who only has a few days left to live suddenly becomes the man he used to be in his thirties. But will he find happiness after becoming a handsome thirtysomething man again? This fantasy where people crave to be young again will be portrayed in a comical way for viewers.