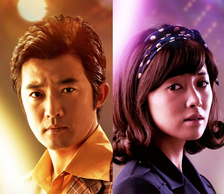 This show traces the lives of the main characters over a 50-year period and begins from the 1960s. Set in the backdrop of social upheavals, the characters are influenced by these circumstances and their human drama sheds light on important events in the history of South Korea. In addition, this TV show will flesh out the changing pop culture of South Korea in different eras. Before television was widespread in the country, many folks went to the movie theaters to satisfy their thirst for entertainment and pop culture. Focusing on the people of a roaming theatre troupe who later get roles in films, romantic relationships and ambitions of the troupe members are illuminated. The main character is betrayed by his best friend and loses everything he ever owned. He joins a theatre troupe and becomes the de factor leader, taking the group on tours across the country. He also wages bloody fights with gangs that have a stranglehold on the local film industry in which he emerges victorious. He later becomes the most powerful figure in the movie industry. As this coming-of-age story unfolds in the show, the protagonist encounters many interesting characters, who add zest to the story.