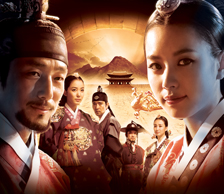 This TV biopic traces the tumultuous life of Lady Choi Sook-bin, who was born as a lowly commoner but entered the royal palace to become a royal concubine where she shone ever so brilliantly. The life of her son, who is fathered by King Sook-jong, is also depicted as he transforms into the next king!
Lady Choi Sook-bin gingerly and wisely maneuvers through the deadly political infighting in the royal courts in order to survive and protect her son, who was fathered by the king. She raises her son into a well-balanced and educated person though strict discipline!