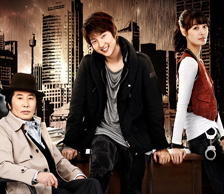 A tabloid reporter turns into a civic hero!

Working as a reporter for a racy tabloid called the Monday Seoul, Do-hyuk uses any means necessary to get a scoop.
One day, he goes to interview Yong-deok, the boss of the Axe gang, who suggests that they start their own newspaper.
Do-hyuk lies about the credentials of his former co-workers when he introduces them to Yong-deok as potential hires for the newspaper venture.
With his former co-workers on board, he is able to launch the Yongdeok Daily together with Yong-deok. But the newly hired reporters soon find themselves sucked into a huge conspiracy that could utterly ruin their lives.