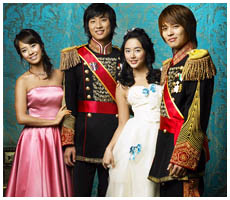 Princess Hours is a drama that starts with the interesting premise. What if modern Korea were a constitutional monarchy with a king? and offers two types of fun the romance arising between a noble prince and an ordinary girl, and the familiarity of all this happening in modern-day Korea. A perfect boy from a noble bloodline, with good looks and a sense of unpolished beauty has to marry against his will at the age of 17. An ordinary girl from an ordinary family, with a clumsy character, average grades and average looks oversteps the prejudice and barriers surrounding her. The process how they fall in love with each other unfolds with excitement.

Shin Chae-kyeong and Lee Shin, because they dont know each other well, go through numerous incidents in which they end up fighting. Chae-kyeong witnesses the scene where Lee Shin proposes to another woman to avoid their arranged marriage and this is how the two become fully aware of each other’s feelings. The story evolves from the fact that Chae ? kyoung’s grandfather was very close to the former monarch, whose wish was for her and Shin to get married. This gives some impetus to the otherwise unrealistic union of the two. As the drama progresses, many other fine men, including Lee Yool, a cousin of the royal family, make their appearance. The story of the two characters, who keep quarreling about structural problems such as the rules of the royal household in the midst of the difficulties of being a prince and of the arranged marriage, will unfold in an interesting way. The show s fun lies in the episodes concerning the status gap that exists between a prince and an ordinary citizen. As more problems of status arise, the uniqueness of being a prince will be more greatly exposed, and doubling the fun of Princess Hours.
When the kings illness gets worse, Crown Prince Shin receives an order to get married his arranged marriage partner. Shin realizes that there have never been personal choices available in the life of a Crown Prince, though he’s only nineteen. Prince Shin proposes to his girlfriend Min Hyo-rin. Taking it as a joke, Hyo-rin shows her cute smile and takes off to practice for an international ballet competition. Shin doesnt hold onto her but just smiles faintly as she turns away and leaves….
Chae-kyeong has a dad who stays at home as a full time house-husband after his business failed and a mom who works as an insurance consultant.
Chae-kyeong's family, which was able to create happiness in the midst of difficult times, suddenly becomes in-laws with the royal household. To Chae-kyeongs parents everything seems much more like a dream, as they see that the arranged marriage grandfather always boasted of become realized. Chae-kyeong cries out loud, not willing to accept the fact that she has to get married at the age of nineteen, but Shin accepts the marriage, not caring about who becomes the queen.
To him, shes not a person he ll ever love anyways and she ll just live in the palace like a doll. Meanwhile, Hyo-rin engages herself only in her ballet practice abroad without knowing about her boyfriend s marriage. Yool, second ? in ? line to the crown and the son of Crown Prince Hyo ? yeol, who abandoned his position 15 years ago and left with his wife for England, comes back to his motherland. Upon hearing this news, the king instinctively senses the danger of Crown Prince Shin losing the crown and orders Shin to be careful of Yool. Shin just laughs at the fight over the crown and ignores the king s words. Chae-kyeong enters the Oon-hyeon palace, the palace of the new queen - bride, to get educated as the future queen. Shin, who visits the detached palace, is stunned by the beautiful presence of Chae-kyeong in her ceremonial dress…