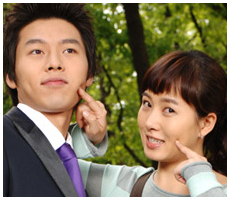 For all average girls in the world...
According to a research, 73% of Korean women believe that they are fat. That’s seven out of ten. Our lead character Kim Sam-Soon is not an exception. She just gained 7kg after having her heart broken.
She is a 29-year-old single who has an average life. She didn’t go to college. She doesn’t have her own apartment or a car. She doesn’t have a boyfriend. Although she has baker’s license, she got fired last Christmas Eve. She is one of us.
Women like her dream of romance that happens only in the movies, but they also know that it won’t happen to them. They believe that they’ll be happy as single if they love their work. Many of them dream of traveling the world for their whole lives. Sometimes they flutter when younger men try to flirt with them. They begin to feel pressured because they are afraid of aging. They still dream of something big happening though, something that will awake their forgotten dreams.
A Romantic Comedy Full of Tastes
The drama is full of interesting and attractive characters. All characters have unique personalities and intriguing traits.
The plot of the drama is simple. But it has something for everyone. You will be able to relate to some characters in the story. They get their heart broken, get over their unsuccessful romance and move on. They work, get stressed, laugh and cry. They seek comfort and treat their emotional wounds.