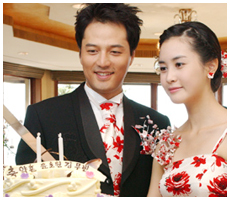 Whether I like it or not, my life starts with my body inherited from my parents and in a background that they made for me. 'Fate' sometimes defines my life that has nothing to do with my will. Some accept this as destiny while others look for 'god' to avoid that 'fate.' What if I get to know what my given 'fate' is and from whom that fate arises? Fate that can neither be denied, no matter how badly we want to, nor be easily accepted even if we admit its presence... This drama talks about what 'fate' is, and twists and turns of life and the beauty of love and sacrifice through those who strive to overcome that 'fate.' Cho Won, brought up in a not so well off but lovely family, meek and amiable, is engaged after a quite short period of dating to Jung Soo, the son of Hang Ja Joo who has just returned to Korea after studying abroad, thanks to the two families' intimate relationship, Slowly shamanic spirit approaches Cho Won, who, as a beautiful and talented graduate student, is awaiting a rosy future of marriage life with a smart bridegroom from a rich family. One day, she goes to a nightclub with her friends, and faints when she recognizes ghosts on big speakers while dancing. Her friends assure her that she must have mistaken something else for ghosts, but from then on, she loses her appetite and gets increasingly exhausted, symptoms that even doctors don't know the reason for. Cho Won, who has dismissed the symptoms as those caused by a mere headache or fatigue, happens to visit a shaman named Yong Hwa Boo her friends introduced out of curiosity for she has to write a paper on shamans. Cho Won's family learn that her aggravating symptoms are due to her shamanic spirit, and they are frightened. Then, does it mean that Cho Won, a founding, is destined to be a shaman? Without informing Cho Won of this, her family have a discussion over this issue and at last her grandfather, Baek Kwang, decides to oust her from the family. Because of the love that they gave her while raising her, her father, Moon Hak, and her mother, Shi Ae, oppose the decision, but because of the firm stance of Baek Kwang, a former legal professional who doesn't want his family image tarnished, the couple unavoidably accepts his decision, breaking into tears. Cho Won's parents rent a room for Cho Won with the money they have saved. Thanks to Baek Kwang's strict order that Cho Won leave home as soon as possible, the family of her fiance Jung Soo notifies her of its decision to break off the match. She loses her family that she loved so much, her aunt and grandmother, the perfect man, Jung Soo, and even her health. She is on the verge of giving up her life as she has lost everything overnight.