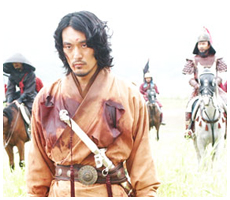 Long time ago in Korea, during the time of Cho-Sun Dynasty, there was a group of women called 'Da-Mo'. 'Da-Mo' is the name of the job meaning the police woman. 'Da-Mo' was regarded as the low class but they had the privilege to investigate lady's private room and interview the ladies of the high society where no man could approach. Da-Mo's who are working in the Palace were even exposed to the undergoing political intrigue.
But Da-Mo, being the low class and women, they were treated no better than the humble servants in the society. They were not free from the suffocating society full of prejudice on class and sex. This drama depicts one life of Da-Mo named Chae-Ok. She possesses the advanced idea for living which could not be accepted by the convention of the society and this is where the touching story of this drama 'The Legendary Police Woman' comes.
This Special Drama Series produced for HD TV, has been under production for 1 full year before the first air. Military Art and vast scenes of Sword Fighting will be a pleasure for eyes and the tragic love story will touch the heart of the viewers.