Tears of the Amazon 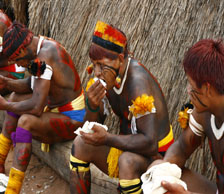 A documentary about the environment and shot in high definition
"Tears of the Amazon" is a big budget MBC documentary that captures vivid images of the Amazon River in Brazil over the course of 300 days. The aerial camera mount, Cineflex will be used to shoot gorgeous high definition images of the vast Amazon River for the viewing pleasure of TV viewers. The documentary will present provoking questions about environmental issues that have a global impact.

Episode 1 Inheritors of the Amazon
Half of the 2 million plant and animal species in the world live in the Amazon, which is a treasure trove of wildlife diversity. There are indios who live deep in the jungles of the Amazon and do without the trappings of modern civilization while adhering to their traditional way of life. With strict paternal families, the indios of the Amazon are polygamous. But Western civilization is slowly encroaching into their lands. Bicycles, satellite dishes... What kind of changes are taking place in the Amazon jungles? The Zoe tribe retain the earliest human way of life and we bring you footage of the Waura tribe!

Episode 2 Amazon on Fire
The lands in the Amazon supply 20% of all the oxygen on earth. When the dry season begins in the Amazon, human-caused blazes will erupt in the jungle. Due to global warming, desertification is already occurring in the Amazon. The fires set by humans is destroying the Amazon jungles at a rapid pace. Mark Lynas who wrote "Six Degrees: Our Future on a Hotter Planet" warns that the massive wildfires that occurred in Australia and California will soon happen in the Amazon. He claims that if a huge wildfire burns through the Amazon, then the place will eventually turn into a desert. The destruction of the Amazon jungle will not only impact the local environment but it will also cause extensive climate change around the world. Are the modern trappings adopted by the Amazon tribes an ominous sign of what is to come or are they helpful tools?

Episode 3 Paradise Lost
Along the Xingu River in Brazil, indios live peacefully. However, the construction of a hydroelectric power plant has forced the indios to leave their homelands and embark on a path to exile. They are leaving behind their traditions and homelands. But greenhouse gases that were emitted during the construction of the power plant have also destroyed the Amazon jungle. The environmental destruction caused by humans have pushed animals and the indios' way of life to the brink of extinction. Thousands of illegal farms have sprouted around the Amazon. The Amazon jungle is destroyed to make way for bean crops that are harvested to feed livestock. And interactions between the indios tribes and the outside world have brought liquor, cigarettes, and drugs into Amazon tribes. These erstwhile Amazon warriors now populate city slums.